Loose Cannon is a pirate themed online slot game from Microgaming that was released in March 2014. The online slot is a five reel game with three rows and 243 ways to win as opposed to the standard pay lines. The ways to win feature means that all combinations of matching symbols that land on adjacent reels from the far left reel count as winning combinations.

With all ways to win active during game play there are no pay lines to select. The betting range is however wide starting at 0.30 and ending at 37.50. The top jackpot prize is 75 500 coins when the maximum bet is placed. An auto play feature is available to have the reels spin consecutively for a predetermined amount of times. This can be set by clicking on the auto play button.

The pirate theme of the Loose Cannon online slot game is portrayed with detailed graphics and animations. The background showcases the view from the pirate ships deck with blue seas, ships in the distance and a pirate island. The symbols are all themed and display various characters and pirate paraphernalia.

The regular paying symbols on the Loose Cannon reels do not include standard playing card icons. There are rather themed symbols that form the lower paying symbols. These are the crossed muskets, a barrel filled with rum, a treasure map and a treasure chest. These symbols pay out 6 coins, 7 coins, 8 coins and 9 coins respectively for five symbols on a winning line.

The higher paying symbols are the monkey, the female pirate, the pirate captain and the Loose Cannon online slot logo. These symbols pay out up to 15 coins, 17.50 coins, 20 coins and 25 coins respectively.

The Loose Cannon online slot wild symbol is the pirate ship. The pirate ship is a standard wild symbol that substitutes for the other symbols that are regular paying. By doing so it assists in creating any winning combinations where they are possible.

The wild symbol only lands on the third reel and will become stacked to cover all positions on the reel. The pirate ships will then come alive with animation and fire cannonballs that may or may not land on random positions anywhere on all five reels. If a cannonball lands on a position, that specific symbol will also turn into a wild symbol. This feature has the ability to turn up to fifteen random symbols into wilds. 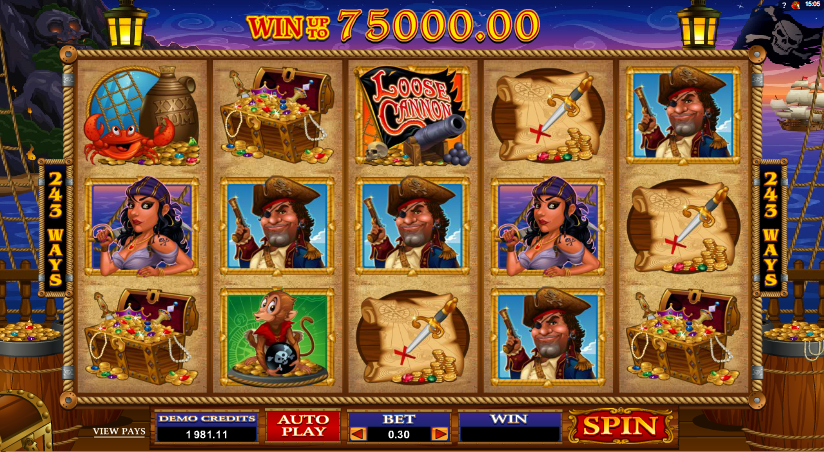 The Loose Cannon Free Spins Round

The golden compass and octopus symbol is the scatter symbol which activates the Loose Cannon online slot free spins round. This symbol pays out for a minimum of three appearing in any position on the reels. If the scatter lands on the first, third and fifth reels simultaneously fifteen free spins are awarded.

During this feature all winning combinations run from both the left to right direction as well as right to left. If the scatter symbols land in the right combination during a free spins then the feature is re-triggered with another fifteen free spins.